“If reform is not approached in an authentic manner, then it just becomes an exercise of checking off boxes.”

Flaherty is one of five police commanders who were appointed by SFPD Police Chief William Scott to serve as executive sponsors overseeing the implementation of 272 recommendations covering five objectives for reform that were issued by the Department of Justice’s Community Oriented Policing Services (COPS) Office in 2016.
The 2016 assessment was conducted at the request of the late Mayor Ed Lee and former SFPD Police Chief Greg Suhr, following a series of events in 2015 that led the city and SFPD to re-examine their policies and practices. 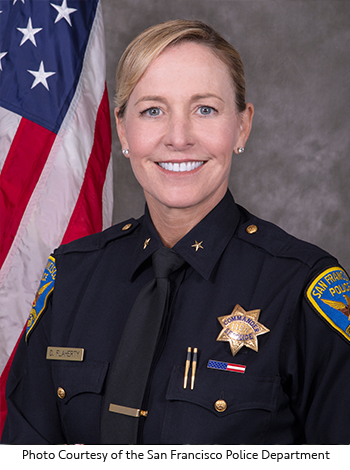 The COPS report was conducted in order to help SFPD improve trust between the department and the community. While deficiencies were reported, the study also found that the SFPD was committed to making changes, which is one of the reasons the reform process has ultimately been successful.

In 2017, the DOJ formally withdrew from working on collaborative reform processes, which led to the SFPD seeking a partnership with the California Department of Justice, who issued their own independent review in 2018, provided oversight, and validated the Department’s work.

To help the SFPD design and implement an effective process for achieving compliance for each of the 272 recommendations, they hired consulting firm Hillard Heintze.

On April 30, the SFPD reached a major milestone after implementing 242 recommendations, leaving only 30 remaining, and became poised to receive external validation for their documented reforms from the California Department of Justice.

“We had the largest collaborative reform initiative in the nation,” shares Flaherty. “But our commitment to the community and to our officers means that we don’t stop here,” she continues. “Throughout this whole process, we were always asking, what else can we do to make it better.”

Flaherty credits many people for the success of the SFPD’s reform process. “Our commanders, project managers and team members worked nights and weekends for over three years, in addition to their regular duties, to ensure that we arrived at meaningful reforms and created sustainable compliance.”

Flaherty oversaw the implementation of 68 recommendations under the Accountability objective. She worked with a finding manager, numerous project managers and a dedicated team to carry out the recommendations.

“Our reforms are designed for transparency and to ensure that the community we serve has a sense of safety,” affirms Flaherty.

“We are committed to improving accountability, equity and inclusion,” notes Flaherty. “We are providing supportive documentation for each of the recommendations we implemented, which is reviewed and externally validated by the California Department of Justice,” she explains. “Our efforts and dedication to reform will be documented in a public report authored by the California Department of Justice.”

When asked if it is difficult to ask police officers to embrace change and reform, Flaherty doesn’t miss beat.

Reform and change management are two of the most difficult things to achieve in any organization.

Flaherty credits Chief Scott’s steadfast leadership and wisdom for the Department’s ability to successfully work through the reform process.

“He brought to the SFPD a perspective we may not have known. He does not accept the status quo way of doing things just because that’s how it has always been done. He really listens and takes other people’s perspectives into account because he wants the best answers.”

Commander Flaherty’s optimism and belief in the SFPD’s commitment to a positive relationship with the community that is built on trust is irrefutable.

“Our commanders gave their heart to this. There was nothing easy about the process but as officers, we show up every day and do it because we believe in a better way of policing and we care deeply about our community. We are resilient and we will succeed.”

Flaherty’s resilience has been with her from the start. While she was pursuing a degree in sports medicine, her father became ill and could no longer work. She immediately looked for work in order to support her family.

“I was only 19. I filled out an application with the SFPD because I thought policing was a noble profession. It was the best decision I made.”
MEA New Membership Signup