Since January 2021, Mirna, an MEA member and Examination and Classifications Manager, has been working hard to identify practices that are barriers for BIPOC (Black, Indigenous People of Color) employees interested in qualifying and competing for desirable positions and career advancement at the same rates that their white counter-parts enjoy. 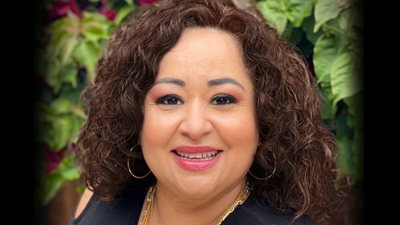 Mirna Palma
“It’s a huge undertaking to re-evaluate exams. There are many rules and different stakeholders” admits Mirna.

Mirna manages a team of analysts doing their part to make good on the City of San Francisco’s promise to advance racial equity throughout its hiring practices. A pledge that Mayor London Breed continues to reaffirm in order to confront the structural racism and institutional inequities that persist in San Francisco.

In 2019, following legislation that created the Office of Racial Equity (ORE), City departments were required to establish action plans to identify and address racial disparities and inequities within their departments and directed to file annual reports documenting their progress.

“I am a person of color, but even I had to learn for myself about unseen barriers to employment that I never considered before,” recognizes Mirna. “Thanks to the equity work we are doing at HSA, I am now more aware.”

“There are different degrees of disadvantage even within BIPOC communities,” she explains. We have to remove barriers and afford BIPOC applicants and employees as much access as possible to compete for jobs.”

Mirna’s team oversees the creation and administration of civil service exams, recruitments, and job classifications for HSA. She also serves as the Agency’s liaison to the Civil Service Commission that oversees the entire examination process for the City.

Mirna recognizes that education requirements for certain jobs are a barrier. “I have always thought that education is important, but through my work with the equity group, I learned that BIPOC are not always afforded the opportunity to go to college.”

A graduate of San Francisco State University, Mirna recalls her own experience with higher education. “I can tell you first hand that had it not been for my local community college, and the fact that I was on financial aid, I would not been able to attend a four-year university,” she recalls.

“My parents did not go to college, so I didn’t have a role model to follow. We have to take a closer look and reassess the educational requirements of our jobs.”

“My experience gives me a big picture perspective to make preliminary recommendations about which classes need to broaden their minimum qualifications, describes Mirna.

“This gives subject matter experts a baseline to start the job analysis process. We know disparities exist and that there are also opportunities to make a difference.”

A report on the City’s Equal Employment Opportunity (EEO) policies and practices, commissioned by Mayor Breed and prepared by Professor Emeritus William B. Gould IV of Stanford Law School, describes the City’s management tiers as lacking BIPOC representation, particularly at the higher levels.

According to Gould, approximately 16% of department heads and 9.38% of the Senior Manager level V to VII roles are filled by Black Americans (read here).  Key findings include the need for the City to invest in new training and apprenticeship initiatives for incumbent workforce, upskilling programs to enable workers to join skilled trades and other sought-after jobs, and reforming hiring and promotion procedures to reduce hiring manager discretion and ensure the independence of interview panels.

“There’s a focus on African-Americans and Latinos because they are among the most unrepresented communities working in the City, particularly in management positions,” observes Mirna.

Management positions in the 0900 series need a four-year degree. However, applicants can substitute up to two years of professional experience in lieu of the education requirement.

Her team is working on getting approval for a full degree substitution for some management positions at HSA allowing more supervisors, many of them people of color, to compete.

With regard to the need for civil service exams, Mirna explains that they are necessary because of a long history of nepotism and cronyism in government.

“The reasons that exams became a requirement in the first place was to avoid politicians hiring their friends and family,” declares Mirna. “We perform a job analysis and establish an examination process so that we can determine the skills needed to do a job and assess applicants for competency, but we want to do this based on merit, inclusion and racial equity.”

HSA is setting an example for other departments to follow with programs that actively recruit interns from historically disadvantaged communities. HSA has hired many clients through the CalWorks, Career Pathways and JobsNow! programs to work at the Agency.

“We have had three employees from JobsNow! who tested successfully in the civil service exam and were hired permanently after completing the program. Two of them were promoted outside of the exams unit! I am so proud of all of them.”

If you ask Mirna about the importance of having people of color represented in management and leadership positions, she draws from a deep well.

“This is about presenting up and coming employees with a different picture that they never thought possible, she reflects.
“When employees see people who look and sound like them in leadership positions, they see possibilities for themselves and become inspired,” observes Mirna. “They start to believe that it is possible to reach new heights in the organization.”
Mirna Palma has been working for the City and County of San Francisco for the past 23 years. Mirna serves as the Examination and Classification Manager (0931) with the San Francisco Human Services Agency (HSA). Prior to joining HSA in 2014, Ms. Palma worked at the Controller’s Office (CON), the Department of Human Resources (DHR), and the Department of Public Health (DPH). Mirna began her tenure with the City in 1998 as an 1842 Management Assistant. She moved to a 1241 HR Analyst position with DPH before becoming a 1244 Senior HR Analyst with the Controller's office for seven years. She lives in South San Francisco with her family, including her two teenage daughters, ages 16 and 19.
MEA New Membership Signup